Citizens' Councils are not spared from Corona either. "Keep your distance" is the rule. The consequence: Like many other projects, the Citizens' Council "Germany's Role in the World" was moved into the digital space. In January and February of this year, there was thus a nationwide virtual citizens' council for the first time, - co-organized by Dorothea Vogelgsang of the Institute for Participatory Design (IPG). Dorothea is a political scientist and has been supporting the IPG in the conception, implementation and follow-up of participation processes since 2019.

With her and numerous participants, we shared practical issues around the implementation of the digital citizens' council, their experiences and what we can learn from them in our sixth Liquid Tank. We have summarized Dorothea's presentation and our discussion for you here with some questions.

Missed the event or want to check it out again? We have recorded Dorothea's presentation for you here. 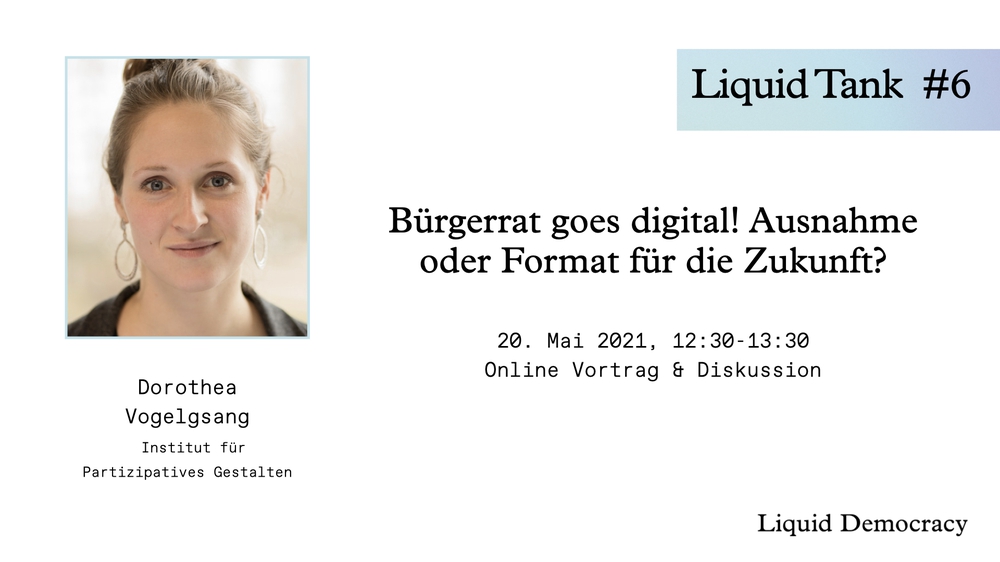 What is the goal of a citizens' council and how does it work?

In citizens' councils, controversial political issues are discussed with a diverse group of citizens over a longer period. The aim is for participants to delve deeply into the issue and work together to develop balanced recommendations for policymakers. Citizens' Councils are intended to represent Germany's social diversity and constitute a kind of "mini-Germany". For this reason, the nationwide Citizens' Council "Germany's Role in the World" made use of a lot-based procedure in which 160 participants of different ages, educational levels, genders, and cultural backgrounds were selected and invited by letter. You can read more about this on the Citizens' Council website.

How was the digital citizens' council implemented?

The 160 participants and the organizing team met in 10 sessions in the digital space. In order to divide the space well, there were different group sizes, e.g. thematic "travel groups" and smaller groups of six to eight participants, in which in-depth discussions took place. Here, a core question was addressed, and contradictions and points of agreement were noted in writing. The digital space made it possible to work easily and flexibly with different group sizes. Digital and analog tools were used to creatively and clearly visualize or document the participants' contributions. Because "it is important to communicate not only through words" - and not only digitally.

Which digital tools were used?

In the digital citizens' council, use was made of the tools Zoom, Mural and Howspace. Howspace was used as a central tool for interaction for surveys and for important information such as agendas, results and presentations. Zoom acted as a conference tool where people met in sessions and also as a recording tool for documentation. And on the Mural, the Orga team was able to document the results from the groups.

Which opportunities and challenges does a digital citizens' council bring?

Implementing a digital citizens' council involves a lot of effort. In addition, not all participants are necessarily digitally savvy and have a good Internet connection and the appropriate technical equipment. We tried to compensate for this by ensuring that the support team always provided close assistance to participants via telephone, chat and also in person.

Also, the attention span in digital formats like the Citizens' Council is less than if the event were held in analog. That's why it's important to allow enough time for breaks between appointments. And, of course, interpersonal contact is more difficult in the digital space. So the challenge is to target the breaks in the digital Citizens' Council so that the balance between recreation and social proximity and exchange can be well designed.

At the end of the Liquid Tank, we collected practical tips and suggestions for future Citizens' Councils with the participants.

Dorothea objected that in future citizens' councils the question "How do I invite participants?" should be addressed more. It was also discussed whether there should be parallel public participation processes in which all interested parties can participate. In addition, in the future, consideration should be given to how to create a balance between technical input and recreation, and how early to include the participants' contributions to the meetings.

In addition, to overcome the issue of technical difficulties, a participant from the organization "Es geht Los"recommended creating spaces in the future where terminal equipment and technical support would be made available.

"I can't imagine the participation culture going back to a pure analog culture." - Dorothea Vogelgsang

Several Participants suggested thinking more about hybrid events, where input is delivered digitally and sharing, and networking opportunities take place in analog. At the same time, however, it was also emphasized that hybrid formats involve a great deal of effort and come with their own unique challenges. But one thing is certain: They should end with a big closing party!

The digital citizens' council remains a challenge, but also an opportunity for flexible, location-independent, and creative digital participation. We are excited to see what the future holds!

We would like to thank all participants for the lively discussion and the many ideas - and we are already looking forward to the next Liquid Tank!

To learn about our events in time and to get new input on digital democracy, subscribe to our newsletter.

Have feedback on the Liquid Tank or suggestions on who we should invite next? Visit us at adhocracy.plus/liquid-tank/ or write to us at hallo@liqd.net.